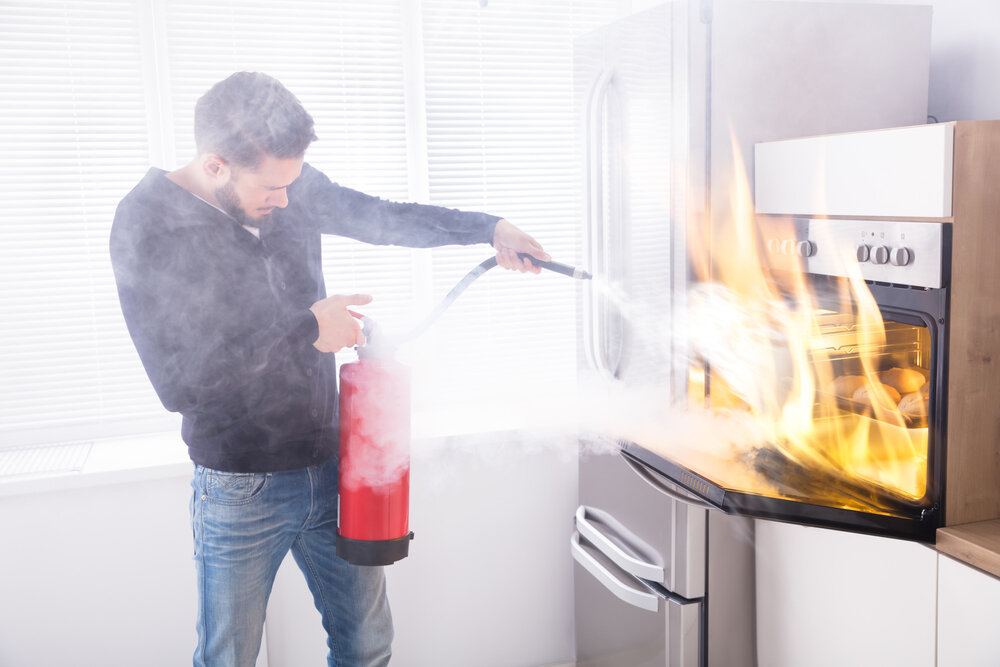 Dealing with a fire damaged house is something that no homeowner wants to experience. However, fire damage doesn’t always occur from conventional causes.

We’ve put together a guide that details some of the most uncommon culprits behind fire damage in the home. Let’s get started.

Interestingly, many people are unaware of the fact that electronic devices could cause a fire under certain circumstances.

This is typically a result of improper air circulation within the device. To clarify, someone who frequently uses a laptop while in bed could inadvertently block the air vents of the device.

If they use their computer for intense tasks like streaming or running large applications, the computer might not be able to cool itself down sufficiently. Eventually, the temperature may increase to a level that is able to set nearby objects on fire.

Other reasons behind improper air circulation include dust or hardware issues. Occasionally, a computer’s fans may malfunction and be unable to cool the device. When using a computer, be sure that there is plenty of open space around the device so that the vents are unobstructed.

It’s also recommended to make any necessary repairs as soon as you notice an issue.

Most fires that occur from electrical outlets are a result of overloading the hardware. If you connect a device that doesn’t align with the voltage capabilities of the outlet, you run the risk of causing electrical sparks.

This could very easily cause a large fire within your home. However, electrical outlets could also cause fires as a result of faulty wiring.

This is a particularly dangerous situation, as you may not always be able to tell this issue exists. Loose sockets can also prove to be an issue. If a socket is loose, there’s a good chance that the wiring inside is damaged.

When electrical current flows to the wiring, it could burn the surrounding hardware. A loose socket could also strain the connection, something that causes the same consequence.

It’s in your best interest to occasionally check sockets that you use on a regular basis.

Large piles of paper are a significant fire hazard that many homeowners don’t consider. The truth is that they could easily make a minor fire much worse due to the rate at which they burn.

As you might guess, those most at risk are individuals who frequently have stacks of paper lying around. Letters, magazines, and other pieces of mail could quickly become a hazard in this situation.

This is particularly true if they are located near other fire risks. A common scenario could involve keeping large stacks of paper or files around a computer that is not properly ventilated.

It wouldn’t take much to send this entire workspace up in flames. Instead, it’s highly recommended that you only keep the paper that you need for your personal records. Otherwise, you should dispose of it appropriately to avoid any complications from occurring.

This is one of the most intriguing causes for many people learning about unconventional fire hazards. Glass objects have the potential to magnify sunlight if left in the appropriate location. This means that a large amount of heat will become concentrated in a small area, something that could ignite flammable objects.

Paper, fabric, and wooden furniture are at notable risk. For this reason, you should always be aware of where you keep the glass objects in your home.

If a room is particularly sunny, it’s best to relocate these objects to other areas of the house. Of course, this problem can be circumvented by keeping curtains drawn over the windows.

It also may not apply to your living situation if your home is in an area that is not particularly sunny. Someone who lives in Seattle, for example, will rarely be at risk of this occurrence. Those who live in Arizona, California, or Florida, however, need to be much more aware.

It’s no secret that faulty appliances are often the cause of household fires. In fact, people often think of microwaves or toasters as examples of these situations. Dishwashers, though, can be just as dangerous.

This is primarily due to the fact that these appliances use a combination of heat, electricity, and liquid. It only takes a malfunctioning component in one of these three categories to cause an issue.

To elaborate, let’s assume that liquid is able to leak into other parts of the dishwasher. If too much liquid comes in contact with the electrical components of the appliance, a fire could start.

Those who have dishwashers installed in their homes should ensure that they properly maintain these appliances. The good news is that this doesn’t require much time or attention.

Additionally, it will often be obvious whenever you need to make dishwasher repairs. Keep this in mind moving forward so that you can recognize this problem before gets out of hand.

Otherwise, you might find yourself in a costly and potentially dangerous situation that involves fire damage restoration.

So, be sure to keep the above information in mind in order to have an understanding of uncommon causes of fire damage. Otherwise, the above fire damage causes could be something that you deal with instead of avoiding.

Want to learn more about what we have to offer? Feel free to get in touch with us today and see how we can help.